Obverse Die 22 is significant for its distinctive clashes and association with VAMs 33 and 33B.  The die is always coupled with reverse die a, or the normal die.

Clashing is attributable when there is letter transfer, and in the case of die 22 it appears in both VAMs with clashed letters, some strongly clashed.

However, it is the earlobe doubling and not the other features that identify the die.  The earlobe is slightly doubled at the bottom of the ear.

33B - Doubled Ear, Clashed Obverse In and st, Reverse M

Obverse Die 22 is paired with two VAMs, but in reality just one because the VAMs are 33 and 33B.  VAM 33B is the extreme clashed version of VAM 33, and is a WOW classified VAM.

Because these are merely clashed versions of the same die, by definition there can be no variance in the details of the die.  But what about die cracks and breaks?  With the VAM 33 we have seven examples as of this discussion.  The span the range from no die cracks to some pretty nice ones.

On these VAMs the major die cracks are on the reverse, but we found one coin with significant obverse die cracks. 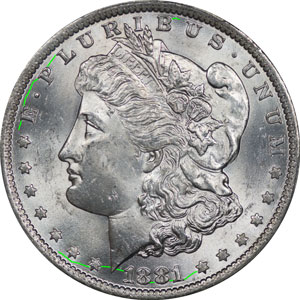 We only have one example of a VAM 33B, but it shows cracking that closely mirrors that of the VAM 33. 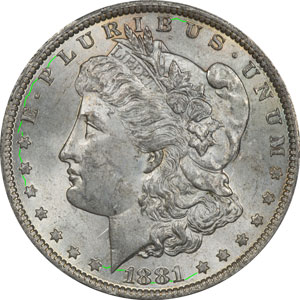