As time passes, VAMs sometimes change designation as we learn more or have more examples to work with in our study.  As of July 2017 we have nine know VAMs with the "Bearded Eagle" feature.  The feature known as the "Bearded Eagle" arises when a clashed die has a portion of Liberty's hair transferred to the reverse die.  On the reverse die this hair is revealed above, below, or above and below the eagle's head and neck area. 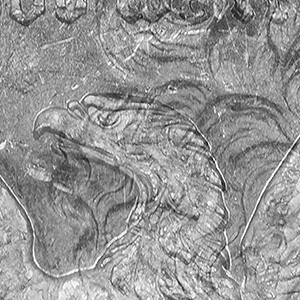 Bearded Eagles are not unique to the 1881-O and appear in clashed varieties for many date/mint series.  In the 1881-O series the most dramatic example is VAM 1B2 where the hair is visible both above and below the neck.  All other varieties have hair exposed only below the neck.  One must also remember that dies can rotate slightly, especially when clashed.  So the alignment of the hair might be similar to this image, but not exact.

Below are explanation for each of the nine varieties for the 1881-O.  You can click on the title to go to the VAM page for that variety and see more examples. 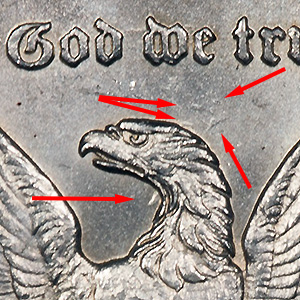 This is a Mint State 63 coin, PCGS 33582014 and this VAM is the most dramatic of the group with hair showing both above and below the eagle's head and neck. 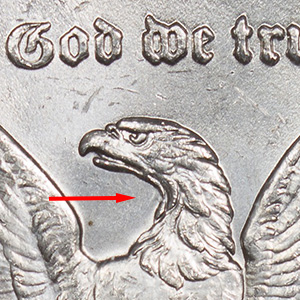 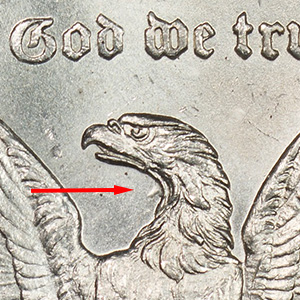 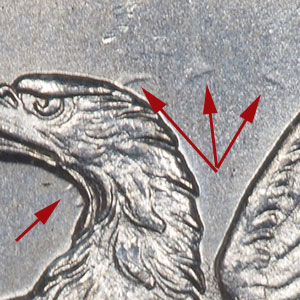 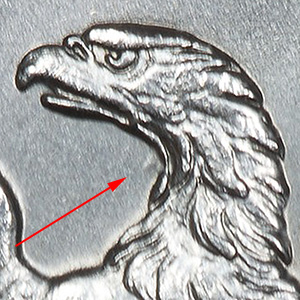 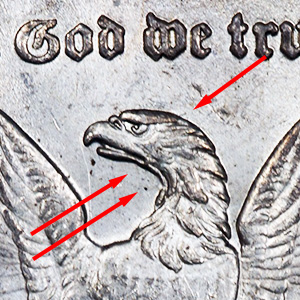 This is a Mint State 62 coin, PCGS 33582020.  VAM 33B is one of the designated WOW VAMs and we have only one example.  On this VAM there is so much going on with clashes that this feature can be overlooked.

On VAM 33B the hair appears only slightly above the eagle's head, and below the eagle's neck in a more truncated fashion than on other varieties.  You really need magnification to see this one well. 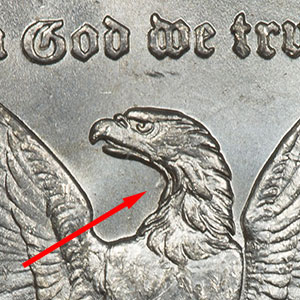 This is a Mint State 62 coin, PCGS 32125849.  We have three examples of VAM 49 ranging from XF 45 to MS 62.  On all three the beard is more visible in the photographs than on the coin, so lighting is important and the clash may be faint. 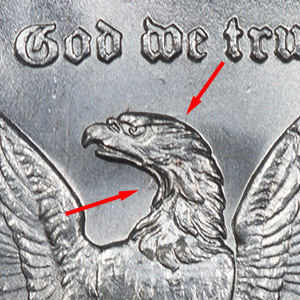 This is a Mint State 64 coin, PCGS 33465346.  This is our top example of VAM 50A and the features are visible but faint and not easy to identify.  Below the neck the clash is often weak, and above the head it is very tiny and faint. 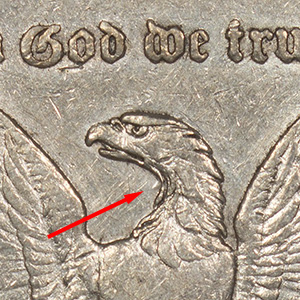 This is an Almost Uncirculated 50 coin, PCGS 24127031.  We have only one example as of this analysis and it is obviously not a top flight coin.  On our example the clash below the neck is still visible, but we will need better examples to know if there is anything above the head area.

There is a lot happening with this VAM and the neck clash is only one feature.