The Stone Mountain Half

We are still working to add coins to the web site from our last VSS submission, but should finish them in the first week of July.

There is one coin in an earlier submission that will need LVA examination when possible.

There is no logical reason for us to have slowed down while the relocation and rebuilding of the VW web site is taking place, but we have.  I think for many the "go to" place for VAMing just seems to be in a state of flux and sitting on the sideline for a month or so seems the right thing to do.

But they will be up and going in July and we will all get back to the hobby.  The changes look promising, so having to relocate will have benefits.  Out hat is off to JB and others who have worked hard to facilitate the changes.

Our new look at the Stone Mountain Commemorative Half Dollar kicked off on June 24 to the public.  Like all things numismatic there was a lot of background work to get to here, but we finally felt like there was enough substance to open up the site for study. 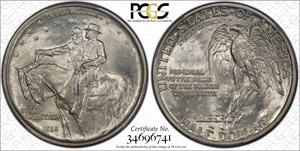 Even though I grew up with the carving I quickly discovered that the story of the coin and the carving were much deeper than I thought.  I believe this study will also be informative and groundbreaking for this commemorative series.  If your interests extend to this area of collecting we hope you will follow along.

While researching die varieties late last month we discovered some excellent work that has been done by John Wexler.  His work is documented and available at Wexler's Die Varieties.

We found his work to be exceptional for several reasons and think this is important, especially for new VAMers.  John gives  visual documentation into the processes that created die doubling whether it was caused by repunching die features or by die creation through repeated annealing and tempering of dies.

Also of note is his classification system for die doubling which we think deserves some extra credit for innovative thinking.  The system was developed with the help of Alan Herbert (deceased) back in the 1970's and provides a clear and concise method of distinguishing the errors we see on various coins and VAMs.

We can definitely recommend a visit to his web site for some detailed explanation of how doubling occurs and how the process of die making contributed to the issues we see from the Morgan Dollar era.