As we ended the year and look back a lot happened and 2020 is proving to be quite busy, even with the COVID quarantine.

We have five coins to send to Leroy for analysis and that needs to get going again now that Leroy seems to be taking submissions.

I keep hoping for some miracle that will suddenly reveal more information about the third, fourth, and fifth Directors of the New Orleans Mint, but so far detailed information about these three men has eluded me.  So, I will continue to search for enough details to expose their tenure in some coming months.

After the retelling of the exploits of the first two, David M. Bradford and Joseph M. Kennedy, the next few Directors may seem boring.  But who knows, they may also seem as colorful as Bradford and Kennedy.

But along the way in this search, we uncovered minutes of a Branch Mint Congressional Committee investigation in 1842, conducted by the Committee on Public Expenditures.

This was the 27th Congress, 2nd Session in the House of Representatives.  Titled The Branch Mint at New Orleans, the investigation actually analyzes the operations of the three mints at New Orleans, Dahlonega, and Charlotte.

New Orleans was on a slightly different path with the coining of both gold and silver coins, driven primarily by imports of those metals through the port, but also some domestic mining operations.  All three Branch Mints were established on March 3, 1835. 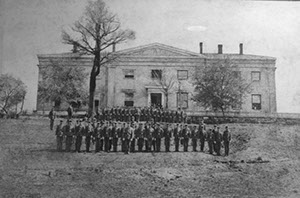 The Dahlonega Mint after conversion to classrooms at North Georgia College 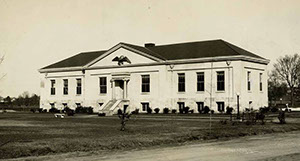 From my reading, the report seems to have an undertone of “Guilty until proven innocent” sentiment, and partisan politics was alive and well in 1842.  The report opens with more than a little sarcasm aimed at friends of the Branch Mints in the Senate with these comments:

"Doubtless they were sincere in their desire; doubtless some of them, at least, believed that, by the establishment of these branches, gold eagles and half-eagles would be made so plenty, that every well-conditioned farmer would be furnished with a long silken purse, through the interstices of which this species of hard money would glitter…"

Whereas the opponents of the Branch Mints believed:

"…the metallic currency would not be thereby increased to the amount of a single dollar, and that the coinage at these branches would be far more expensive than at the principal mint at Philadelphia, which was capable of coining all the gold and silver likely to be mined in this country or imported from others. Facts, which we shall show in this report, prove these allegations to have been true."

We know the latter argument is not true because the Branch Mints were often called on to supplement the Philadelphia Mint production during the Morgan Dollar days.  We also know that without Branch Mints in gold discovery areas local assayers and businesses often coined their own money with varying degrees of success and quality.  In these cases the Branch Mints served the important function of stability and commonality of the money in circulation.  This would be repeated with the San Francisco Mint later in the century.

We also need to remember that David Bradford was dismissed in 1839 and if there were questions concerning his dismissal a report proving mismanagement of the New Orleans Mint were produced the change of guard would have been more acceptable.  Bradford had strong political ties in Louisiana, and connections to the Senate through Jefferson Davis, Zachery Taylor, and Franklin Pierce.

The committee was also critical in cost overruns for construction when we know the Mint was constructed on swampy land that required significant reinforcement.  (Within just a few years it became obvious that more reinforcement was needed and that even more money was needed to save the building.)  But claiming “I just cannot understand the cost overruns” is a common political ploy.

At one point they even got down to comparing the Mints to the buildings of Rome and expenditures worthy of Roman Emperors.

"The committee are fully aware that these delicate and refined gentlemen did but “follow in the footsteps of illustrious predecessors;” that some of the emperors of Rome expended immense sums of money in the erection of baths in the “Eternal City;” but, if the committee do not greatly err in their historic recollections, these luxurious buildings were the growth of the EMPIRE, and not of the republic of Rome, and were erected by the masters and not the servants of the people."

From a productivity standpoint all three Branch Mints were criticized for their cost of coining versus Philadelphia, also an invalid comparison in many ways.

The Philadelphia Mint had an easier time predicting both cost and the supply of specie.  The Branch Mints were just the opposite with a greater dependency on discovery and importation.  The committee goes on to mix capital cost with operational cost to arrive at the conclusion that the Branch Mints should be closed.

“The branch mints have failed to accomplish the object had in view by their establishment.”

We know that much if not all of this is political theatre because all three Mints were closed because of the Civil War in 1861 and not Congressional investigation.  But there were some interesting observations aimed at David Bradford with details like individual listings for armchairs, desks, porcelain spit boxes, a table, a bust of Livingston, baths, water closets, and even down to an eagle paper weight.  There is little if any note that the New Orleans Mint also contained the residence for several officers of the Mint.

Perhaps the current political theatre in Washington has deep roots that go all the way back to these early days of the Republic.  When all these discussions were taking place, the Republic was just about six decades old and still feeling its way along.  The events of World War II are more distant than these from the founding.

What else was going on in 1842 that might have created such theatre?

First, in the Apportionment Act of 1842 the number of Representatives was decreased from 242 to 223, so some Representatives lost their jobs because of the change.  This was a major overhaul of the districting of the House and the first time the representation had undergone a major change.  The House also swapped to be predominately Whig and they carried the debate for a more deliberative body without an “excess of democracy.”

The change was little noticed because most citizens were reeling from the Financial Panic of 1837.  This was one of the first depressions of our young country.  Like the Great Depression in the early 1900’s, the Panic of 1837 lasted for years and ended in the mid 1840’s.

This may sound familiar, but the panic was caused by crop failures, and excessive speculation in land, cotton, and other goods.  We were on a bimetallic monetary system and the economy had become saturated with excesses of silver from Mexico and China.  The world economy had become linked and additional money flowed in from Great Brittan through the sale of cotton and the creation of state-backed municipal bonds.  At the height of the speculation cotton prices began to decline as transportation improved, and there was a major wheat crop failure resulting in higher wheat prices and a famine for many workers.

In a cause and effect scenario the Bank of England tightened credit and raised interest rates to attract more specie reserves to the country.  United States banks and bond issuers also had to  raise rates and this resulted in major defaults, many of which hit England and Europe.

Inflation soared and unemployment rose as many businesses closed.  Many people lost everything and became destitute.  From President Van Buren's  perspective it became a failed Presidency.

During this period Arkansas, Illinois, Indiana, Louisiana, Maryland, Michigan, Mississippi, and Pennsylvania all declared bankruptcy.  There were only twenty-six states, so just about one third of the States defaulted on their debts.  Much of the debt was aimed at infrastructure projects and when the States defaulted many canal, railroad, and other projects just stopped.  The response from the States was varied with some outright defaults, some partial defaults, and some repayments.

If all this has a familiar tone it is because this is the cycle our economy seems to repeat every ten to fifteen years. 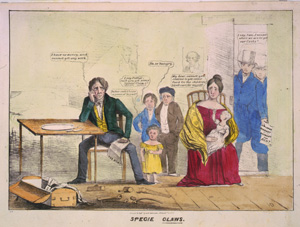