We learned a valuable lesson with our final submission of 2018.  It was just too large and we plan to do fewer and smaller submissions in 2019.  We should do our first submission to JB before then end of February.

In 2019 we will crossed over 1,000 coins in the inventory and now cover almost 90% of recognized VAMs with documentation and photographs.  As always we are appreciative of the help from VSS for both VAM verification and photography.

But we have a number of things to complete with the existing inventory.

We know we have several duplicates among the identified VAMs because of timing of the identification of each.  These need to go to LVA for clarification.

Documenting the die cracks has proven to be very helpful in identification if dies and finding die sequences.  This will probably take all year and will be fun to complete!

We continue to work on the reverse die fingerprints and we are making some progress.  This month we tackle Reverse Dies h and m.

On VAMworld, Reverse Die h is associated with VAMs 10 and 21.  Those dies are described as follows:

Reverse Die m is associated with VAM 25 only but is described as:

If we have identified some coins as VAM 10 that are not strongly doubled or tripled in the date then those just may have been the VAM 21 coins  identified back in 1980.  1980 seems like not so long ago, but it was 38 years and we have no photographic evidence.

But for this to be true the coins would have to have the same reverse and different obverses.

We burned the midnight oil a little last night and got the pricing update done with current PCGS prices as of December 31, 2018.  For the first time in a while there was some upward movement in prices.

If you held from 2007 until today then in general you have seen an upward movement in the value of your coins.  But the highs of 2011 have not been regained.  Below mint state there was a little movement of a dollar or two in the middle grades.

But from MS 60 on up there were some nice changes in the PL and DMPL coins.  If you bought MS and MS+ coins you might have even lost value.  So for 2018 it was PL and DMPL that shined, literally.

How much did we drive the market?

In 2018 we slacked off considerably with out purchases and in particular purchases from MS 61 through MS 63.  There were price drops in this range of grades (outside of PL and DMPL) and we might just have contributed.

We actually looked at Reverse Die h as used on VAMs 10 and 21 earlier when we looked at obverse dies.  But we now think we might have overlooked the correct identification features. 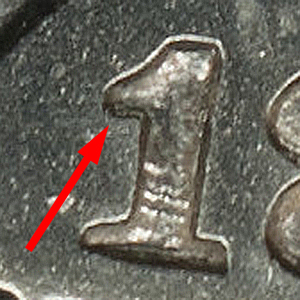 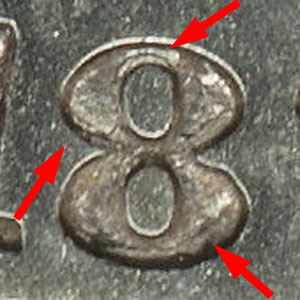 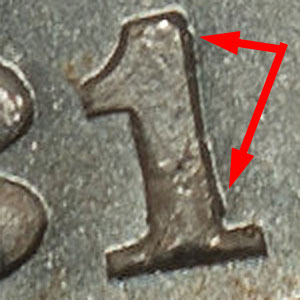 As you can see from these photos the date feature is distinctive and the double or triple digits are very evident.  The first 1 is tripled on the bottom of the flag and it probably shows tripling in other areas.

The first 8 shows clear tripling inside and outside the upper loop, and surface doubling on the lower loop.  And very important to note is that there is NO SPIKE IN THE UPPER LOOP.

The second 1 shows doubling as notches at the top and bottom right side of the vertical shaft. 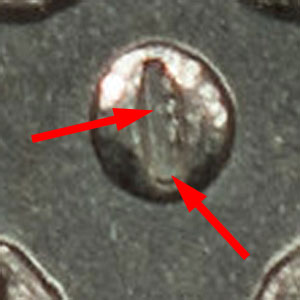 The mint mark is tilted slightly left and has doubling in the form of a strong bit of metal on the right inside of the O.  There will often be a faint line of the inside of the doubled mint mark trailing off toward 7 o'clock at the bottom inside.

To know we have the Reverse Die h there are evident polishing areas in the right wing, right most tail feather, and left wreath. 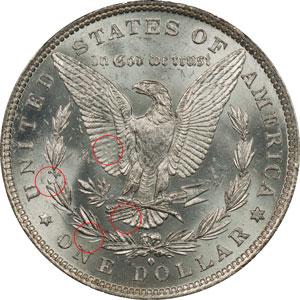 These images are from PCGS 27409712, an MS 63 example.  After examination we now believe we have confirmed fifteen examples of VAM 10. 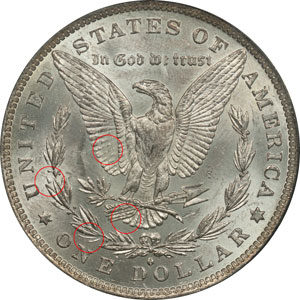 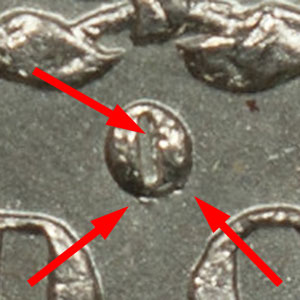 We looked for other distinguishing marks, but both have pitting in the wings to the same degree.

This VAM was identified back in 1980 by Martin Field.  It has no photographic representation, so relying on written descriptions has made it very difficult to pin down.  To be a VAM 21 with Reverse Die h, the coin would need to have the same reverse die as VAM 10, but no date doubling on the obverse.

We had just about given up when we went back through our VAM 25 coins and discovered that there is one coin that is different.  PCGS 84368587, an MS 63 coin identified as a VAM 25. 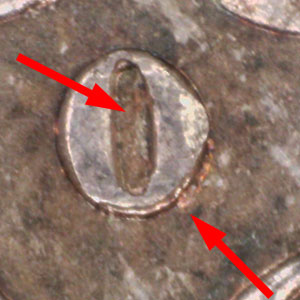 The mint mark on this coin is completely different and shows doubled at the bottom.  This matches none of the coins identified as VAM 10 or VAM 25. 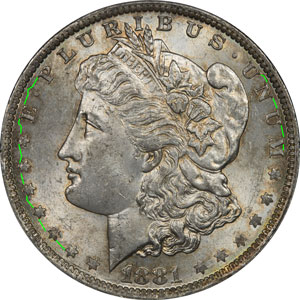 But we get no hints about the reverse die from die cracks because there are no cracks on the VAM 25, Reverse Die m or on this coin.

So we turned our attention to the pitting on the wings and we found a unique set of pitting bumps that are present on all three coins. 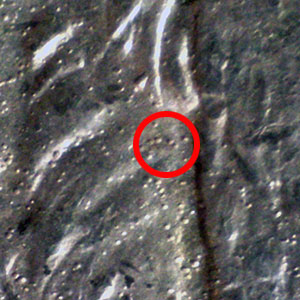 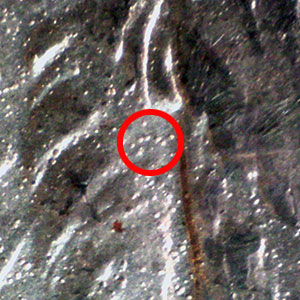 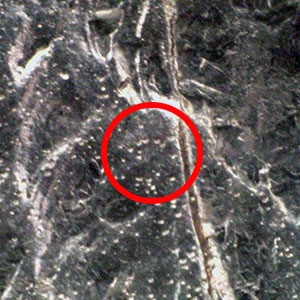